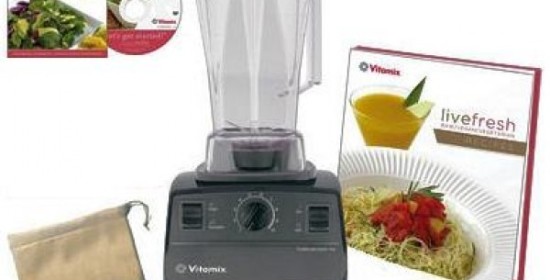 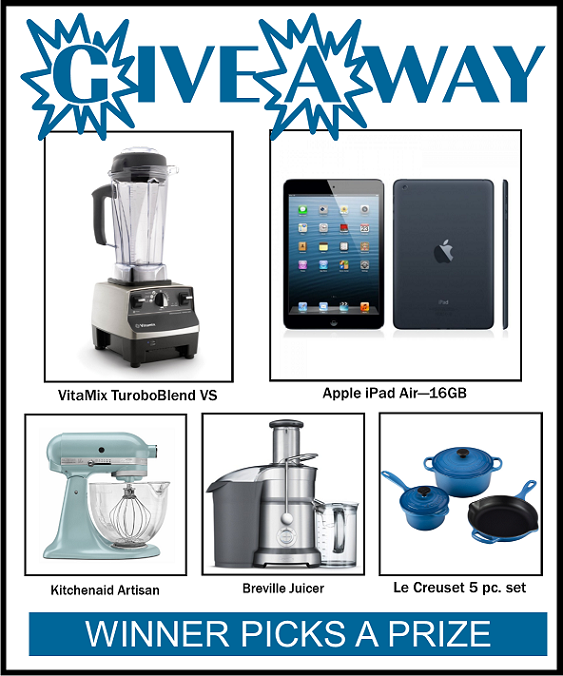 Winner gets to pick 1 of 5 awesome prizes

Holly chose the VitaMix TurboBlend VS as her prize.

Get your complimentary 1 year subscription below…

NO PURCHASE NECESSARY TO ENTER OR WIN. A PURCHASE DOES NOT IMPROVE YOUR CHANCES OF WINNING. VOID WHERE PROHIBITED BY LAW.

1.  Promotion Description: The ‘Winner Picks A Prize! Giveaway]’ (“Sweepstakes”) begins on 02/15/2014 at 12:45 PM (Eastern Time (US & Canada)) and ends on 02/28/2014 at 11:59 PM (Eastern Time (US & Canada)) (the “Promotion Period”). By participating in the Sweepstakes, each entrant unconditionally accepts and agrees to comply with and abide by these Official Rules and the decisions of Organic Eats Magazine (“Sponsor”), which shall be final and binding in all respects. Sponsor is responsible for the collection, submission or processing of Entries and the overall administration of the giveaway. Entrants should look solely to Sponsor with any questions, comments or problems related to the Sweepstakes.
2.  Eligibility: Open Worldwide but depending on the laws in your area, like certain Canadian Provinces, participation in this prize giveaway may be prohibited by law. Check the laws in your area before participating. You must be 18 years or older to enter or older. Void where prohibited or restricted by law. Sponsor and their respective parents, subsidiaries, affiliates, distributors, retailers, sales representatives, advertising and promotion agencies and each of their respective officers, directors and employees (collectively, the “Promotion Entities”), and members of their immediate families and/or persons living in the same household as such persons, are ineligible to enter the Sweepstakes or win a prize.
3.  Winner Selection: The winner of the Sweepstakes will be selected in a random drawing from among all eligible Entries received throughout the Promotion Period. The random drawing will be conducted within 24 hours after the prize giveaway ends, by Sponsor or its designated representatives, whose decisions are final. Odds of winning will vary depending on the number of eligible Entries received. Winner will be posted in the February issue of Organic Eats Magazine on February 1st and must e-mail Subscribe@OrganicEatsMag.com to choose their prize, within 30 days, or on or before March 31st, 2014. Any winner that cannot be notified by email, that does not respond to email notification, whose e-mail notification is returned as undeliverable, and who does not e-mail Subscribe@OrgaincEatsMag.com to claim and choose their prize, automatically forfeits their prize. The potential prize winner may be required to sign and return an affidavit of eligibility and release of liability, and a Publicity Release (collectively “the Prize Claim Documents”). No substitution or transfer of a prize is permitted except by Sponsor.
4.  Prizes:

Only one prize per person and per household will be awarded. Gift cards and gift certificates are subject to the terms and conditions of the issuer. Prizes cannot be transferred, redeemed for cash or substituted by winner. Sponsor reserves the right in its sole and absolute discretion to award a substitute prize of equal or greater value if a prize described in these Official Rules is unavailable or cannot be awarded, in whole or in part, for any reason. The ARV of the prize represents Sponsor’s good faith determination. That determination is final and binding and cannot be appealed. If the actual value of the prize turns out to be less than the stated ARV, the difference will not be awarded in cash. Sponsor makes no representation or warranty concerning the appearance, safety or performance of any prize awarded. Restrictions, conditions, and limitations may apply. Sponsor will not replace any lost or stolen prize items.

Prize will only be awarded and/or delivered to addresses within the continental United States. All other prize winners will be awarded a gift certificate of equal or lesser value than the prize awarded. Some Countries, including some Canadian Provinces prohibit participation in giveaways, check the laws in your area. All federal, state and/or local taxes, fees, and surcharges are the sole responsibility of the prize winner. Failure to comply with the Official Rules will result in forfeiture of the prize.
5.  Online Entry: Enter the Sweepstakes during the Promotion Period online by signing into the entry form. The entry form can be found on the following website at .

Automated or robotic Entries submitted by individuals or organizations will be disqualified. Internet entry must be made by the entrant. Any attempt by an entrant to obtain more than the stated number of Entries by using multiple/different email addresses, identities, registrations, logins or any other methods, including, but not limited to, commercial contest/sweepstakes subscription notification and/or entering services, will void that entrant’s Entries and that entrant may be disqualified. Final eligibility for the award of any prize is subject to eligibility verification as set forth below. All Entries must be posted by the end of the Promotion Period in order to participate. Sponsor’s database clock will be the official time keeper for this Sweepstakes.
6.  Privacy: All entrants acknowledge that if they are chosen as a winner, certain of their personally identifying information may be disclosed to third parties at least as required by law, including, without limitation, on a winner’s list. As well as having their name listed in the Febrauray issue of Organic Eats Magazine and on the Organic Eats Magazine FaceBook page.  Winner is asked to submit a photograph of themselves with their prize to be posted in the February issue of Organic Eats Magazine and on the Organic Eats Magazine FaceBook page. All personal information submitted as part of the Sweepstakes, may be shared by and between the Promotion Entities, and each of the Promotion Entities will use such information in accordance with their respective independent online privacy policies. Organic Eats Magazine respects your privacy and does not sell e-mail addresses.
7.  Limitation of Liability: Sponsor is not responsible for any incorrect or inaccurate information, whether caused by website users or by any of the equipment or programming associated with or utilized in the Sweepstakes or by any technical or human error, which may occur in the processing of submissions in the Sweepstakes. Sponsor assumes no responsibility for any misdirected or lost mail, or any error, omission, interruption, deletion, defect, delay of operation or transmission, communications line failure, theft or destruction or unauthorized access to, or alteration of, Entries. Sponsor is not responsible for any problems or technical malfunction of any telephone network or lines, computer online systems, servers or providers, computer equipment, software, failure of email or players on account of technical problems or traffic congestion on the Internet or at any website or combination thereof, including injury or damage to entrant’s or any other person’s computer related to or resulting from participating downloading materials in the Sweepstakes. If, for any reason, the Sweepstakes is not capable of running as planned, including infection by computer virus bugs, tampering, unauthorized intervention, fraud, technical failures, or any other causes beyond the control of Sponsor which corrupt or affect the administration, security, fairness, integrity or proper conduct of the Sweepstakes, then Sponsor reserves the right in its sole discretion to cancel, terminate, modify or suspend the Sweepstakes. In such event, Sponsor may, in its sole discretion, perform the random drawing from among all eligible Entries received prior to or after such cancellation, suspension, or modification.

In the event of a dispute concerning who registered online to participate in the Sweepstakes, the registration will be declared to have been made by the authorized account holder is defined as the natural person who is assigned to an email address by an internet provider, online service provider, or other organization (e.g., business, education institution, etc.) that is responsible for assigning email addresses for the domain associated with the submitted email address. A potential winner may be requested to provide Sponsor with proof that the potential winner is the authorized account holder of the email address. If a dispute cannot be resolved to Sponsor’s satisfaction, the entry will be deemed ineligible.
8.  Winner’s List: To obtain a copy of any legally required winners list or a copy of the Official Rules, send the applicable request and a self-addresses, stamped, #10 envelope to Organic Eats Magazine cc: Winner Picks a Prize! Giveaway, at 68 1125 North Kaniku Drive Unit 906 Kamuela Hawaii 96743. Request must be received no later than 24 hours + 6 MONTHS for the name of the winner and, by the end of the promotion, for a copy of the rules.
9.  Sponsor: The Sweepstakes is sponsored by Organic Eats Magazine, 68 1125 North Kaniku Drive Unit 906 Kamuela Hawaii 96743, subscribe@organiceatsmag.com
10. Rafflecopter Disclaimer: This promotion is powered by Rafflecopter. Metric Feat LLC (“Rafflecopter”) does not sponsor, administer or endorse this promotion. By entering this promotion, Participants agree to Rafflecopter’s Privacy Policy (http://www.rafflecopter.com/rafl/privacy/). For technical information about the Rafflecopter widget, please visit http://blog.rafflecopter.com/2012/08/anatomy-rafflecopter-giveaway/.
11. Facebook Disclaimer: Entrants should understand that they are providing their information to the Sponsor and not to Facebook. This promotion is in no way sponsored, endorsed or administered by, or associated with Facebook.
12. Prize giveaway winner will be posted in the free February issue of Organic Eats Magazine on February 1st.  It is the responsibility of the prize giveaway winner to contact Organic Eats Magazine and claim their prize by e-mailing Subscirbe@OrganicEatsMag.com.  To receive a free copy of the February issue, subscribe at www.OrganicEatsMag.com. Organic Eats Magazine is a free, monthly online publication. There is no purchase necessary to enter or to win.

The "Aloha Cooks" live in Hawaii and create original recipes using healthy whole foods and since one of them is a registered dietitian you can be sure they are delicious and nutritious.

View all posts by: admin

Leave a Reply to admin

Click here to cancel reply.
Or by logging in via: